As Mumbaikars bid adieu to Lord Ganesh, we captured the immersion procession of Lalbaug Cha Raja, one of the most popular Sarvajanik Ganesh Pandals in Mumbai 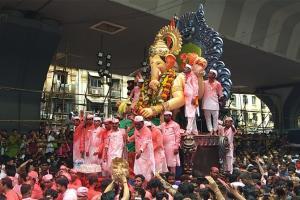 The immersion procession of Lalbaugcha Raja started in the morning at Lalbaug, Parel. Pic/Manjeet Thakur


On Thursday, the Ganesh Visarjan procession of one of Mumbai's most famous Ganesh idol - Lalbaugcha Raja started at morning from Lalbaug, Parel. The Lalbaughcha Raja was founded in the year 1934. Every year, a stream of devotees visit the Lalbaugcha Raja pandal during the 10-day-long Ganesh Chaturthi festival. The Lalbaughcha Raja is also known as the Navsacha Ganpati, which means it fulfils the wishes of its devotees.

The immersion of the Ganesh Idol of Lalbaug Cha Raja takes place at 8 am the next morning and is done using a special raft. The Lalbaug Cha Raja is organised every year by the Kamble family, who have a workshop by the name of 'Kambli Arts' in Lalbaug, Parel.

Here are a few glimpses of the 2019 Ganesh Visarjan process of 'Lalbaugcha Raja:

The idol of Lalbaug Cha Raja leaves for its final journey from its pandal in Lalbaug, Parel as devotees throng on rooftops of houses to get a glimpse of their favourite Bappa. Pic/Atul Kamble

Thousands of devotees who were seen following the final journey of Lalbaug Cha Raja were also seen seeking blessings of Lord Ganesha as it made it way out for the Visarjan procession. Pic/Atul Kamble

Thousands of devotees gathered at Lalbaug, Parel in order to bid farewell to the Ganpati idol of Lalbaug Cha Raja. Arrangements were also made for the devotees of Lord Ganeshto view the live coverage of the visarjan procession of 'Lalbaugcha Raja'! This year, the first look of Lalbaugcha Raja was unveiled on September 2. Citizens of Mumbai were given a visual treat as the pandal of Lalbaug Cha Raja, which was decorated with the theme of Chandrayaan 2.

Watch video of the Visarjan highlights of Lalbaug Cha Raja 2019:

The pandal of Lalbaug Cha Raja is located at Putlabai Chawl, next to Lalbaug Police Station in Lalbaug market, Parel. The Lalbuag Cha Raja is accessible from Dadar, Parel, Chinchpokli, Byculla and Currey Road and can also be visited by sing via BEST buses, taxis, and private vehicles.

Catch up on all the latest Crime, National, International and Hatke news here. Also download the new mid-day Android and iOS apps to get latest updates

Next Story : A stitch in time