Ajaz Patel's introduction saw the skipper slog sweep him for a six and then he went on to collect timely boundaries. Root, on the other hand, played the ideal foil as the two batters slowly started turning the game in their favour 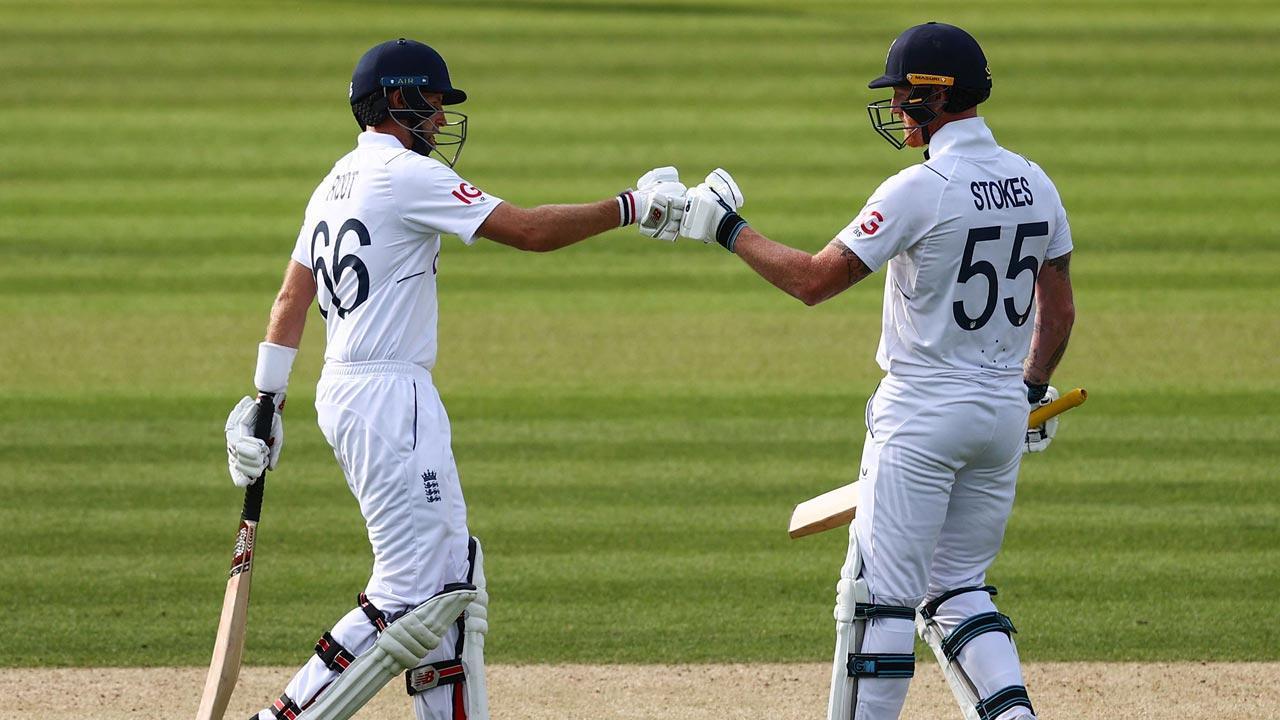 
Fighting knocks from captain Ben Stokes (54) and Joe Root (77 not out) took England closer to the victory against New Zealand on the third day of the first Test, here on Saturday.

England were 216/5 at stumps on Day 3 with Root and Ben Foakes (9) unbeaten at the crease. The hosts need only 61 more runs to win the opening Test but one more wicket in the morning session on Sunday could blow this game wide open again.

Earlier, the game started after a lengthy delay due to rain. Daryl Mitchell, who finished unbeaten on 97 by stumps on Day 2, completed his ton with a drive-through extra cover in the first over of the day.

However, very soon, New Zealand lost their momentum in the space of five deliveries. First, Mitchell ended up edging Stuart Broad behind to the keeper that brought an end to the 195-run partnership and in the very next ball, Colin de Grandhomme had to walk back following a run-out.

A team hat-trick was achieved as Broad got rid of Jamieson. Soon after, Tom Blundell, who was watching his partners get out at the other end, also departed to the pavilion after and missed his century by four runs. Thereafter, Tim Southee (21) struck a few boundaries to extend the lead as New Zealand eventually managed to set a target of 277 for England after getting bowled for 285 in their second innings.

In reply, England also got off to a poor start as Alex Lees departed early despite looking good in his short stay and then Zak Crawley, Ollie Pope and Jonny Bairstow followed suit after the lunch break.

England could have found themselves in more trouble had De Grandhomee not overstepped. Stokes played a poor stroke and was castled by De Grandhomme but received a lifeline since the allrounder had overstepped. The England captain took full advantage of the chance offered to him as he put on a gutsy display alongside Root to resurrect the chase.

Ajaz Patel's introduction saw the skipper slog sweep him for a six and then he went on to collect timely boundaries. Root, on the other hand, played the ideal foil as the two batters slowly started turning the game in their favour.

Kiwi skipper Kane Williamson had held Ajaz back following the six in his first over but was forced to bring him back, only for Stokes to target him again for massive sixes. Off the very next over, the left-hander brought up a vital half-century. However, Stokes couldn't carry his innings longer as Jamieson targeted him with a short and he couldn't drop the glove in time as an edge carried through to the keeper.

A few overs later, Root too reached his fifty and kept adding to his score much to New Zealand's frustration. The stylish batter stitched another half-century partnership with wicketkeeper Ben Foakes, who was resolute in his defence. That partnership reduced England's fears of a collapse before stumps and took them closer to victory.

Next Story : Uthappas spread the cheer at Chahar-Jaya wedding reception